General Comments, Questions about all things OmnipotentS that don't go in other topics/forums
Post Reply
39 posts

Enyo does it. Not sure how to do it correctly myself. Every time I switch, it half works or when I respawn, the game switches me back and I end up back on the team I started with. Plus for me it wouldn't make a difference since I'm only a mid-level player at best.

And switching to the other team when your team is winning is about as likely as when you told her "only the tip" and "I'll pull out before ...", LOL
Top

I've switched several times, and I know Enyo has as well.

However, there's two mutators (EvenMatch which does the point shuffle and one other (name escapes me)) that make sure the teams don't get numerically unbalanced. So they won't let anyone, including admins, switch if it ends in a 2 player differential,which gets corrected at round starts or manually via 'teams".. meaning you can't Force it unless you leave, but it still won't let you join to a team that is 1 player count different.

Lately I'll spec join and then join the team that needs help, especially on smaller matches 6v6 or less.
Top

There aren't a lot of people playing anymore. If you list the unique players that join the server, it's probably < 50 people. Take the list of 50 people and rank them manually yourself. Any player that joins not in the list can go back to the old stats method.

Players like Tator, Enyo, Leon, Xexx will be at the top. They should not all be on the same team

I came here to post this. We should try hard coding the top players and weighting their scores non-linearly vs. 2nd and 3rd tier. E.g., 1st tier is 5-7 points per player, 2nd tier is 3-4 points, 3rd is 2-3 points, and everyone else is 1 point — with the Balancer trying to even out the aggregate point score
Top

And the other thing, I know Enyo's pointed out before, point system isn't best representation. We had a match two days ago, score-wise pretty balanced...game-wise...nope. My losing team didn't cooperate building nodes.. 2, or better yet 3-4 linkers REALLY helps getting it up, as having node destroyers in position and waiting.

Last night we played Minus-Kitchensink, I'll post up the screenshot later, where the losing team had many higher scores, yet lost the match.. 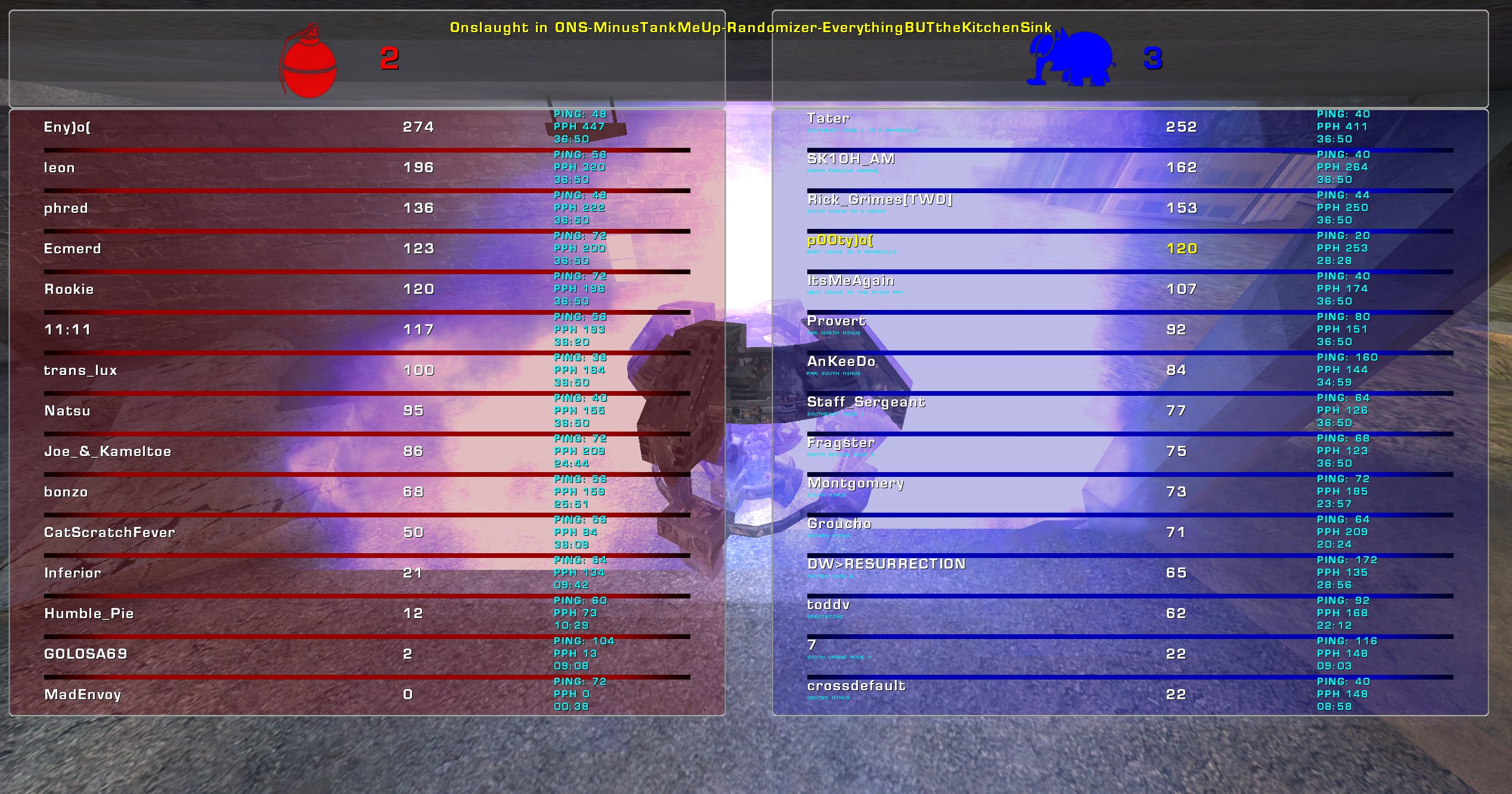 There's so many intagibles. I always think of the Smoker quote "Sometimes you're the bug and sometimes the Windshield". Which I take,even with balancer, you can get lopsided matches. I like the idea of "tiers" and we'd have to hard code them (or take the ranks from here: https://www.omnipotents.com/utstats/rankings.php?type=6 which isn't perfect either, as helper-bot likes to play during the day against bots)
Top

Indeed, I've been saying this for YEARS... a high score does not necessarily translate to teamwork on nodes, which is what absolutely wins games in ONS. Insanely, people will argue with that, please don't. Pooty and I are of the same mindset that teamwork on attacking and building nodes is what wins.

Knowing PPH is not a good measure for balance in ONS, I looked for a stat that already exists in our UTStats DB that could better rank players than the "Rankings" page order, which seems really wonky to me. Spoon!! doesn't rank well, but he's an excellent team player anyone would want on their team, he just doesn't play often enough to move his ranking up. Helperbot is an idiot that attacks hordes of bots with a mino every day around 3pm, but his player rank is near the top.

So, I started looking at the Effectiveness score for each player and it seems to be a better "ranking" for players in general. I'm not sure how that's calculated, but it's not the same as the weapons eff. I used pooty's same example and added every player's Eff. % to illustrate the stark difference between teams, and it supports why the blue team overran us the whole time. I remember the two wins we had we squeaked out comebacks in OT first two rounds, but barely and only because leon and I had tons of good flyers those 2 rounds. Then we got stomped. Couldn't find any data on the two missing players at all, as if they're not in the DB, they prob changed names. 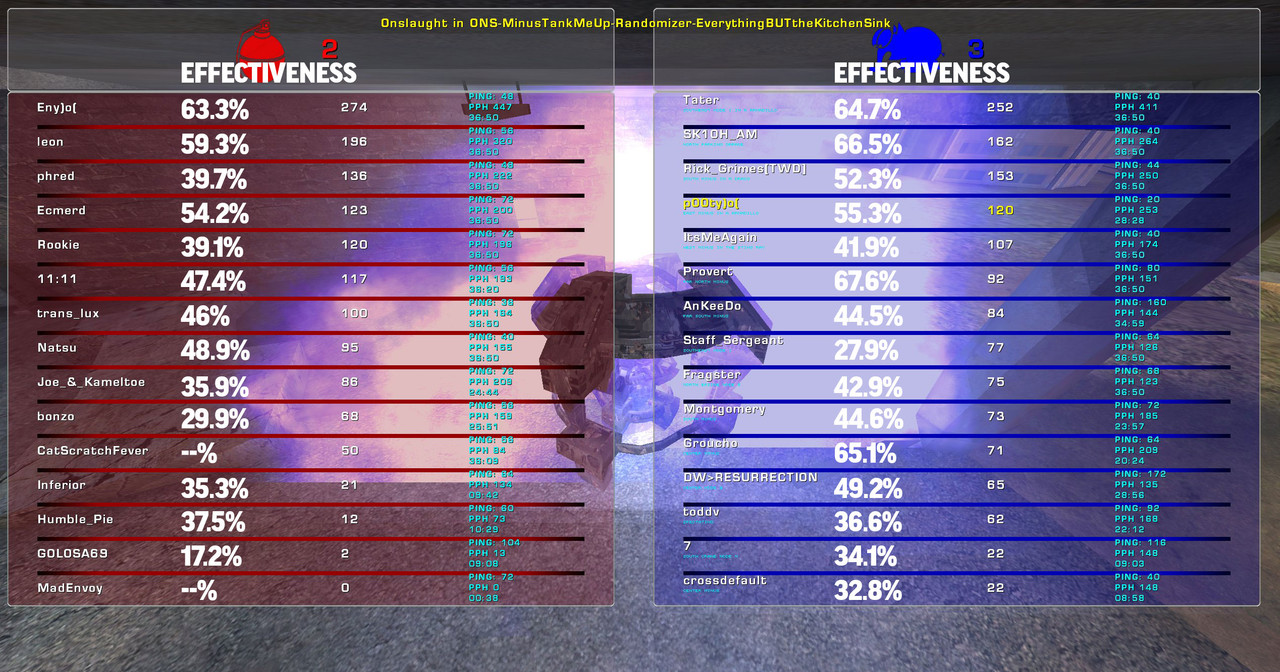 The numbers below clearly illustrate blue had a huge advantage with 11 players @ 40+% vs. only 7 for red. To make things worse, we had 8 players under 40% (counting the two missing data, but I know they're noobs), while blue only had 4 under 40%. Most critically, red had 4 times as many players above 60% than blue.

This looks very telling to me... pooty, how is that effectiveness % getting calculated? All the schlubs under 40% are the usual suspects that rarely show up at the most critical nodes and still haven't figured out dodge jumping. I think if we could get the balancer to use this Eff. % as a ranking system, we might actually get some semblance of balance. Thoughts?

“Never argue with stupid people, they will drag you down to their level and then beat you with experience.”
― Mark Twain
Top

Enyo wrote: ↑Fri Jul 23, 2021 7:39 pm
Indeed, I've been saying this for YEARS... a high score does not necessarily translate to teamwork on nodes, which is what absolutely wins games in ONS. Insanely, people will argue with that, please don't. Pooty and I are of the same mindset that teamwork on attacking and building nodes is what wins.

Reminds me of the time me and Anon were on a team on MB... in the least BigHead way, we should have floored the enemy team. Guy was more worried about killing people at their core / on the floor below from their tub instead of getting the node. We scored the exact same, but he had nearly double the kills I had... couldn't count the number of times I'd get to the enemy tub that he was already at, try and destroy it only to get the node in red before it locked. If only it had been damaged by a player already there.
Nodes matter more than players in almost every aspect of the game.


Enyo wrote: ↑Fri Jul 23, 2021 7:39 pm
I think if we could get the balancer to use this Eff. % as a ranking system, we might actually get some semblance of balance. Thoughts?


Agree, I'd like to try to play using the efficiency %. Not sure how it's calculated, but it looks like a decent representation from your analysis.
I'm assuming it's just healing / destroying nodes, or killing defensively / offensively at nodes.
Last edited by Tater on Sat Jul 24, 2021 3:15 pm, edited 1 time in total.
Top

So Eff is kills/(kills+deaths+suicides) I think. Why does that work, you get lots of kills and don't waste a bunch of time respawning?

I think we need a custom stat for ONS. Based on maybe Eff % above, factored by nodes created / ph ; destroyed / ph Not sure cores destroyed is that meaningful. If I get a chance I'll try to work up a custom page...I'd love to change the ranking page so we could see the player stats all together
Top

So Eff is kills/(kills+deaths+suicides) I think. Why does that work, you get lots of kills and don't waste a bunch of time respawning?

Seems like its just a measure of your killing ability vs how much you die. Not sure how that translates to players who go to nodes, but there seems to be a correlation. I mean, if you're constantly attacking nodes and your effectiveness is high, that means you're wiping out enemy efficiently at nodes.

Players that don't aggressively attack nodes can have a high efficiency, Nautikal is a good example, but the efficiency scores don't really reflect that as a trend. I think the reason is those aggressive node attackers tend to engage far more enemies than guys like Nautikal that sit on a hill waiting for someone to snipe. A lot of times I'll drop into a node by myself and clear out 3 or 4 guys, or at least 2-3 before I die. I'm sure the same happens to Tater, Leon and Xexx a lot too since they all attack nodes hard and have high eff.

The biggest help of balancing by eff. would be ensuring all those with eff. in the 30's get split up more evenly. It's often the bottom half of the team that drags it down, not the distribution of top tier players. Balancing the middle road eff. players would help a lot too, the guys in the 40-50 range.
“Never argue with stupid people, they will drag you down to their level and then beat you with experience.”
― Mark Twain
Top

I've added this page, its not quite complete
https://www.omnipotents.com/utstats/onsrankings.php
(Ignore the actual rankings..they don't mean much on this page, just look at the details)

I think I will add these to the main player page ( https://www.omnipotents.com/utstats/ind ... ts=players ) since it already has sorting built in.

I did a "composite score" summed up the per hour numbers...and it looks pretty good. (I think that page needs filtered on at least 60 mins of play), but to me its a better "rating" that anything else we have.
Top